The Changing State of Super

SG is the official term for compulsory superannuation contributions made by employers on behalf of their employees. Under the current SG scheme, all employers are required to make a prescribed minimum level of superannuation contributions to a complying superannuation fund on behalf of their eligible employees.
In May 2010, the Federal Treasurer Wayne Swan announced that compulsory employer super contributions were set increase, and on 29 March 2012, the proposed increase in SG entitlements received Royal Assent and became law.
The Federal Opposition have confirmed their support this initiative, and will not make any changes to the increases if they win the September election. 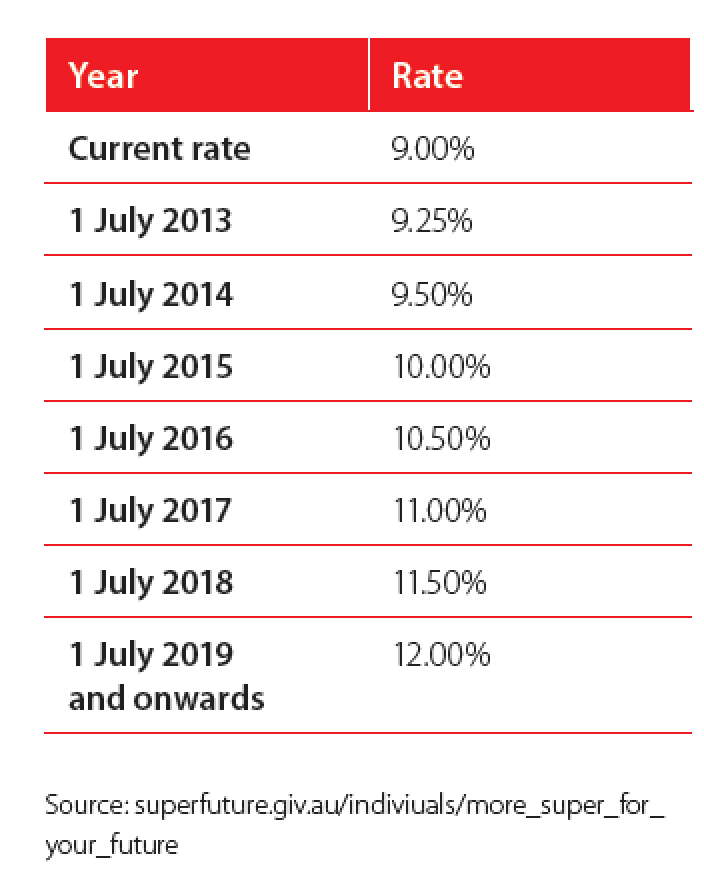 The SG increase has significant financial implications for anyone expecting to remain in the workforce for more than seven years, because the full three per cent increase takes affect from the start of the 2019/20 year – in just over six years’ time. According to the Federal Government, the 33 per cent increase in the SG rate will give a 30-year-old on average full-time wages and extra $108,000 in retirement savings just by turning up for work.1 The Government projects that these measures will generate an additional $10 billion by 2020 and $35 billion by 2035 in private saving each year.

Included in the Government’s legislation is the abolition of the SG age limit from 1 July 2013.  This means employers will be responsible for contributing super regardless of your age – it’s currently capped at 70 years.

Who will fund the additional SG contribution?

Some large employers will fund the additional 0.25 per cent superannuation for their employees. For others, employees will notice this additional charge in their first pay for the 2013/14 financial year, which will reduce their take-home income.

You should check with your human resources or payroll departments if unsure about the arrangements for your employer. Going forward, employers will be able to take the SG increase into account when negotiating future wage agreements so the increase should not stop real wages growing.