Happy New Year! We hope that 2019 is off to a good start for you so far.  A new year often brings about reflection and refocus around where we are heading in.  Also it is a good time to reflect on our relationships and we often say to clients our relationship with money is a key element to explore in this space as it impacts so many elements of our lives.

Check out our money mindset e-book which can help you continue to unpack elements of how you think, feel and behave around money in your life.

Volatility has returned to the Australian and International Equity Markets.  The big picture fundamentals remain supportive of equity markets. The economic backdrop is as strong as it has been in a decade and the corporate sector is healthy, as highlighted by strong earnings growth. Additionally, central banks can reduce their pace of tightening rates, given core inflation rates remain low.

After a period of synchronisation during 2017, global growth has diverged this year, with the US powering ahead, leaving Europe and Japan in its wake (below).  This, combined with a tightening in financial conditions and worries around trade, has posed a challenge for markets in 2018, and has led to a reversal of 2017’s unusual period of high return with low risk. To illustrate, as at the time of publishing, global equities have generated returns worse than -1% during 29 trading days so far in 2018, compared with just two days during the whole of 2017. 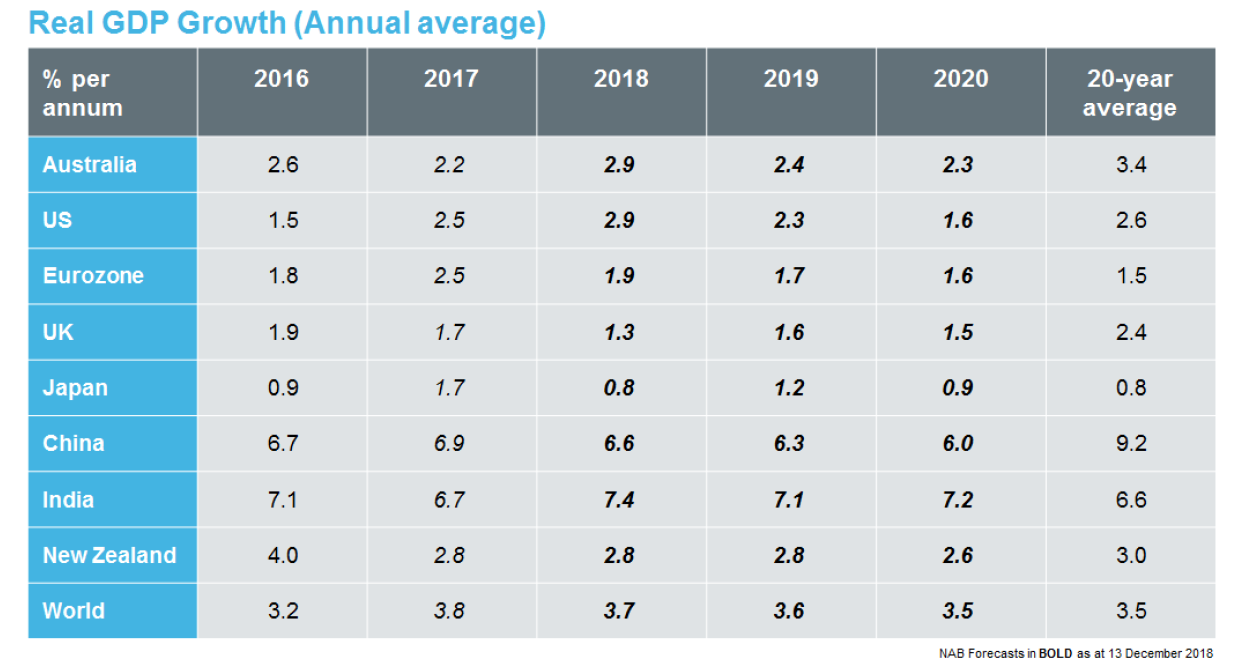 Global equity markets have dropped by around 9% in the 2018 calendar year (excluding currency translation effects). This has been difficult for investors to stomach, however rather than viewed in isolation, 2018 should be viewed in the context of the last decade.

Since March 2009, US equity investors have experienced 18 sell-offs greater than 5% (including the recent one).  Simple maths therefore tells us that, even during good market conditions like we’ve had since the end of global financial crisis (which has delivered returns of over 15% per annum), roughly two sell-offs per year is par for the course when investing in equity markets.

So where to from here? Given the stage of the cycle we’re at, with central banks gradually removing the stimulus that has underpinned equity markets for nearly a decade, the (arguably more normal) level of volatility that we’ve seen this year is likely here to stay. As a result, 2019 will be another bumpy ride. That said, we continue to believe that positive, at-or-above-trend economic growth, positive earnings, and still-low interest rates makes the path of least resistance higher.

While we see upside for equities in 2019, a number of potential air pockets still exist outside of investors having to deal with decelerating economic and earnings growth. While none of these, in our view, alone are enough to derail the economic cycle, a combination of all of these coming to a head at once would likely cause us to reassess our view on equities.

There exists a renewed gap between the Fed dots (where individual Fed governors see interest rates heading) and market pricing (overleaf, top left). While our base case for two to three hikes next year (close to the Fed dots) has downside risk should market conditions force the Fed into pausing, market pricing of less than one hike looks unrealistically low to us, given economic fundamentals. This creates a vulnerability for equities in 2019, should the Fed be forced into surprising the market with rate hikes.

Trade Wars!  Tensions will de-escalate, but it could take a while Trade has been the number one driver of equity market sentiment in 2018, with fears over the economic and earnings impact, and sometimes contradicting messages leading to widespread confusion amongst investors. We have remained broadly constructive on trade during the year, and hold this position into 2019.

Chinese Growth. What’s the minimum safe altitude? China’s economy has slowed to ~6.5% in 2018, from around 7% in 2017. This deceleration in growth reflects a combination of policy tightening (e.g. regulatory tightening on shadow banking, housing restrictions) in 2017 and early 2018, combined with external pressures such as slowing global growth and tariffs on exports to the US.

There remains a good chance that, come March 1st, the US ends up raising tariffs on US$200bn of Chinese goods to 25% from the current 10%. However, there also remains a good chance that this deadline is pushed out to allow for further negotiations. While tensions therefore may need to get worse before they get better, ultimately we think a deal is struck which outlines the way forward for US-China trade relations. Whether or not this includes a roll-back of existing tariffs is a separate question, to which we cannot answer at this stage. However, President Trump is politically astute, and if the trade conflict remains unresolved into 2020, when his focus will clearly be on presidential elections, we suspect voters’ patience will be wearing thin.

Italian Budget. Still trying to find a middle ground…  Italians went to the polls in 2018 and elected a government that, a year ago, would have been considered something of a ‘worse case’ scenario, given previous campaigning around a Brexit-style referendum to leave the EU. However, if one positive was to come out of the Brexit debacle and associated uncertainty, it’s that it has likely frightened off other countries from having a go. In other words, if the UK can’t do it, how are we going to fare any better? Accordingly, the risk of ‘Italexit’, and therefore an EU breakup, has subsided as anti-EU sentiment has broadly decreased.

Brexit. What a mess!  The situation in the UK remains highly fluid. The parliamentary vote to ratify Theresa May’s withdrawal agreement, initially set for December 11th, was cancelled, but the Prime Minister has managed to survive a leadership challenge. Before an agreement can be put before Parliament again, “reassurances” will need to be provided around the Irish border and the depth of future ties with the EU. That said, our base case remains that a Brexit deal is passed through Parliament before the March 29th Article 50 deadline, thereby beginning a ‘status quo’ period of transition through 2019 and 2020, and avoiding a ‘hard Brexit’ return to World Trade Organisation rules. While we cannot rule out a second referendum in 2019 or a ‘hard Brexit’ in March, both of these seem low probabilities at this stage even though contingency planning has now commenced in case of a ‘hard Brexit’. A ‘hard Brexit’ would be highly detrimental to UK growth, and sentiment would no doubt spill over into broader Europe, however we suspect the fear of this scenario and associated market volatility will help get an agreement over the line by March.

Australia, why so glum?  The housing market is providing the ‘doomsday’ fear scenario in Australia. While a slowing housing sector will undoubtedly weigh on economic growth in 2019, helping send it slightly lower, we see fears around this as being overplayed. Rather, we see house price moves as a healthy and necessary correction – though downside risk remains. However, while consumer spending growth will likely slow on the back of consumers ‘feeling’ less wealthy as their house prices fall, we expect the impact of these falling house prices to be largely offset by personal tax cuts, rising wages, strong population growth, significant fiscal spending, a mining sector recovery and an accommodative Reserve Bank of Australia (RBA).

Outside of this, politics, as always, will be in focus in 2019. Currently, betting markets and opinion polls suggest the opposition Australian Labor Party will win the Federal election, due by May. This has stoked fears of a hit to business confidence, however, we see the broad policy mix of the Australian Labor Party as providing upside risk to the Australian economy, on the back of higher fiscal spending, tax cuts, and wage growth stemming from an uptick in industry-level bargaining.

Given our expectation for at-or-above-trend growth in 2019, combined with the fact that inflation is already close to the lower threshold of the RBA’s 2-3% target band (and set to rise partly on the back of wage growth), and the economy is running at close to full employment, a rate hike from the RBA in late 2019 would not surprise us, although early to mid-2020 is the more likely timing for a hike given recent commentary from the RBA has now turned more neutral in tone.

The below illustrates the average performance numbers for each capital city and the national averages.  As you will note that from the below the Brisbane, Adelaide, Hobart, Darwin and Canberra markets have been positive in the background of the downside in the Sydney and Melbourne markets. 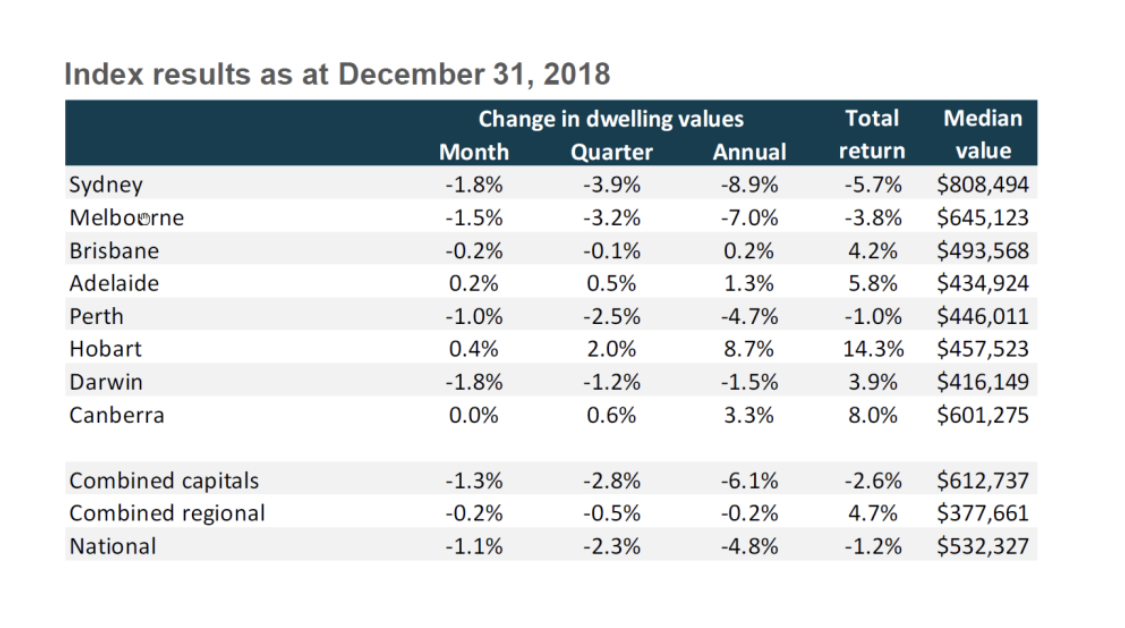 As always with a long term view we suggest a diversified portfolio approach across the defensive asset classes of Fixed Interest and Cash and the Growth assets of Property, Australian and International Shares.

Seek out further advice and start your journey to being free around your money and creating wealth with understanding.

Scott Malcolm has been awarded the internationally recognised Certified Financial Planner designation from the Financial Planning Association of Australia and is Director of Money Mechanics.  Money Mechanics is a fee for service financial advice firm who partner with clients in Melbourne, Canberra, Newcastle and Sydney to achieve their life and wealth outcomes. Money Mechanics Pty Ltd (ABN 64 136 066 272) is a Corporate Authorised Representative (No. 336429) of Infocus Securities Australia Pty Ltd (ABN 47 097 797 049) AFSL and Australian Credit Licence No. 236523