The financial year 2010/11 was dominated by some truly dramatic events – from natural disasters in Japan and Australia to political uprisings throughout North Africa and the Middle East and government bailouts in Europe.

Optimism of the prospects for global recovery boosted growth assets in the first half of the year, only to be replaced by questions of its durability in the second half.  In the last two months of the year, this sentiment was intensified and has continued into the start of the new financial year, principally by the Greek and wider Eurozone debt problems, but also by fears of slower than anticipated global growth. As shares suffered there was a rush for the perceived safety of high-quality government bonds.

Movements in currency was the story throughout the year, the Australian Dollar (AUD) hit a historical high against the US in April. The strong AUD rally left investors with any unhedged overseas returns hurting. A comparison between hedged and unhedged overseas equity returns illustrates this point. For example over the year, the difference between hedged and unhedged returns for the MSCI World and MSCI Emerging Markets Index was 18.85 per cent and 15.96 per cent respectively.

Despite the volatility throughout the year, equity markets performed well. The top 300 companies on the ASX returned almost 12 per cent and the US and European markets did much better in local currency terms (S&P500 +28.1 per cent, Euro Stoxx 50 +10.7 per cent) Likewise, emerging markets performed well in the first half of the year but gave up some returns in the second half on inflation worries (MSCI EM Asia +17.6 per cent in local currency).

Uncertainty over Eurozone problems could continue to persist for some time, but worries about the global economic outlook appear alarmist. Some of the recent flight from equities to bonds may reverse as economic activity picks up again later this year and into 2012. The local economic outlook remains strong on the back of high export prices and continuing rapid growth in Asian markets.

At the asset class level: 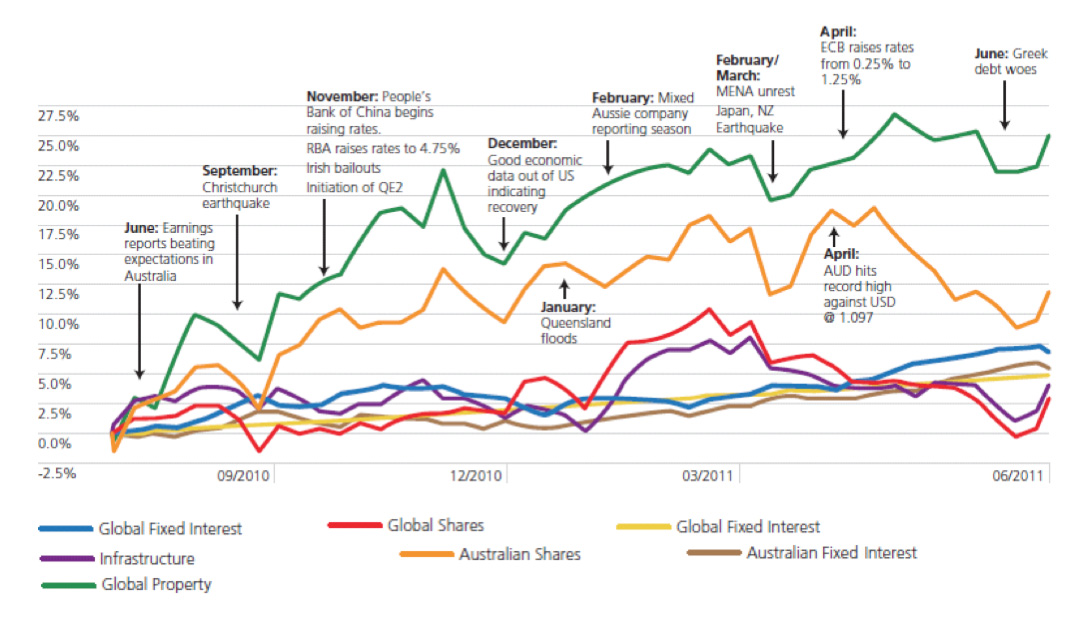 Short-term interest rates were relatively steady for the year with the RBA raising rates just once in November from 4.50 per cent to 4.75 per cent. Short term rates peaked around February in the expectation of another tightening. However, dramatic events, beginning with the conflict in Libya, have subdued expectations of further rises and the 90 day bank bill continues to yield just under five per cent. This was reflected in the Reserve Bank of Australia’s decision on 7 June to hold the cash rate at 4.75 per cent.

Despite a rising domestic interest rate environment, the Australian bond market has been a steady contributor to portfolio returns, serving its role in the defensive portion of the portfolio by counter-balancing weakness in equity markets. Bond prices and their corollary, longer term yields followed overseas trends, roughly in line with expectations for global growth throughout the year.

10-year government bond yields edged down in the first half of the year to a low of 4.80 percent in October. Yields peaked in February at 5.70 per cent in line with higher yields overseas, but then dropped in the wake of the Japanese disaster news. Recently, yields have been edging down over the month from 5.35 per cent to a touch under 5.10 per cent, much of this decline took place as anxieties over Greece’s debt intensified. Other longer-term funding rates followed suit, the 10-year swap rate dropping from 5.85 to 5.65 per cent.

Within sector strategies, investment grade credit and asset back debt have been positive. Credit spreads narrowed throughout the year providing capital growth and they also enjoyed a comfortable yield advantage relative to Treasuries.

The European Central Bank raised its key lending rate by 0.25 per cent to 1.25 per cent in April, making it the first major overseas central bank to start reining in previously ultra-supportive monetary policy. In its June meeting, it left the rate unchanged. Otherwise, the year was punctuated by extremely low short term interest rates in the developed world as governments elected to support their economy with loose monetary policy. The story was the opposite for major developing economies, as China began tightening monetary policy in November and hiked four times in the year, taking the one-year benchmark lending rate to 6.31 per cent. It also raised banks’ reserve requirements nine times in 50bp increments to 21.5 per cent for major banks.

In the second half the year, bond markets were the mirror image of the share markets. Demand for bonds increased as investors became more worried about financial instability and the global economic outlook, which meant bond prices rose and yields fell. Yields for global bonds as a whole are now down to 2.70 per cent (on the Barclays Aggregate Index), government bonds yielding 2.20 per cent and corporates 3.80 per cent.

The capital gains from these higher prices have provided an effective hedge against share market volatility. For example, over the year to date the Barclays Aggregate Index has provided a total return of 4.50 per cent in $US terms. None of this applies to the in trouble peripheral Euro countries. Their bond yields have continued to rise as investors increasingly expect default or some form of restructuring. Greece’s 10-year yield has risen to a little over 18.0 per cent, but yields on shorter maturities have risen more sharply, the two-year yield shooting up from 24.20 to 27.30 per cent over the past month. Irish and Portuguese yields have also been on the rise, although less dramatically.

The S&P/ASX200 A-REIT Index was down 1.50 per cent for the past month, but this headline result reflects day-to-day volatility more than anything of substance. Measurement on another day might well have shown the truer picture, which is that the sector went sideways for the month and provided some defensive value against the weakness of the wider Australian share market. The sector has traded sideways since late 2009, with 1 year returns of 5.87per cent.

Global listed property, on the other hand, followed the broader global share markets downwards over the past month, the UBS Global Investors Real Estate Index producing a 2.41 per cent decline. Many of the major markets were relatively resilient, the UK up marginally, France and Germany each down 0.70 per cent, and the US down 1.10 per cent (all in local currency terms). The weakness came predominantly from Asia, which was down 5.40 per cent, with Japan and Hong Kong each down 6.90 per cent, and from the smaller European markets, for example, Portugal was down four per cent. For the year, Global listed property has been the best performing asset class, with the index performing almost 25 per cent beating the broad market index which delivered 2.97 per cent.

Australian shares have been trading in a relatively narrow range for the financial year, the All Ordinaries bottomed at 4356 on 25 August and hit its high at a touch above 5064 in April. Despite fairly range-bound if an investor had bought in July 2010, the All Ordinaries would have delivered a respectable 12.17 per cent return.

For the most part, the Australian share market marched to an overseas tune over the past year, a period which saw global investors’ see-saw between worries and optimism of a global recovery. The year began positively with the number of companies beating earnings per share (EPS) expectations outnumbering misses by a factor of 1.2 to 1. Combined with guarded FY11 guidance and soft US conditions, the market steady climbed the wall of worry roughly in line with global markets. Heavy rainfall in Queensland, northern NSW and Victoria combined with a mixed January/February reporting season saw the market track sideways for the next couple months.

In March, Japan’s devastating earthquake and tsunami triggered fears of a nuclear catastrophe and had ramifications for a number of Australian stocks in sectors such as insurance, energy and uranium. As fears of nuclear fallout receded, markets rallied and in April, the Australian Dollar (AUD) hit a record high against the Greenback at $1.097. As concerns rose about the global economic outlook, commodity price bubbles and the impending Eurozone debt issues, local indices sagged given Australia’s leverage to the global economic cycle.

The financial year ended with weakness as investors became more concerned about global growth and Europe’s sovereign crisis. Australian shares took their cue from the weak state of world share markets, and Australian equities lost ground over June, the All Ordinaries was down 4.78 per cent for the quarter. There was little to choose between the sub-sectors, industrials stocks down 4.70 per cent, resources down 4.80 per cent and financials down 5.50 per cent.

During the year, QR National was Australia’s largest IPO since the privatisation of Telstra. Demergers were completed by Foster’s (wine) and Tabcorp (casinos) and acquired companies included AXA, AWB and Centennial Coal.

In the end it turned out to be a good year for global shares, although it started badly, world markets weakening in August 2010 and many exchanges recording cyclical low points in the last week of that month. The MSCI World Index hit a temporary low on 26 August, many investors increasingly concerned about the possibility of economic squalls ahead, and in particular worrying about a ‘double dip’ recession in the US. From then onwards, however, markets performed much better, the MSCI World rising sharply, peaking in May 2011, before losing ground due to fears, once again of a slowdown in growth – namely sovereign debt concerns in Europe, stalled growth in the US and a ‘hard landing’ in China.

The rise in investor anxiety can be seen particularly clearly in the VIX measure of expected volatility in US share prices. It was steady in May and the early part of June, but has risen sharply in more recent days as the Greek crisis intensified. Investors are nowhere near as worried as they were when the Eurozone debt crisis first hit the headlines in the first half of last year, and a long way from being as alarmed as they were in the depths of the global financial crisis in 2008/09, but they are clearly more concerned than they were earlier this year.

Over the course of the year, the MSCI World Index was up 21.82 per cent in local currency terms. For Australian investors, however, this was counterbalanced almost exactly by the surging AUD, meaning that for unhedged investors, the strong overseas gains translated into little or no gain in the hand. Yearly returns from the index in AUD terms yielded a mere 2.97 per cent in comparison.

Emerging markets experienced similar gains, with the MSCI Emerging Markets Index gaining strongly in the first half of the year. China was especially strong, with a 14.90 per cent rise in the Shanghai Composite Index in the three months leading to the end of October. From that point on, Asian returns were held back by China as the Central Bank started raising rates to fight inflation and the market subsequently became skittish on worries of tighter monetary policy and the risks around an officially engineered slowdown. Events in Greece and the AUD strength fuelled the sectors underperformance against broader equity benchmarks in the last few months of the year. The unhedged MSCI Emerging Market Index finished the June quarter down 4.51 per cent and finished the year flat at 0.83 per cent. In comparison, the hedged version of the index performed 16.79 per cent for the year.